I must confess that I have not slept a wink. I watched the Segun Odegbami’s anchored Sports Parliament program in NTA yesterday and my heart bled for Nigeria. I took alot home from the program and was reassured that Rohr will be with us till eternity.realsportscast24 reports.

Firstly, I don’t think Rohr would last after our poor showing at the last world cup. My committee would have fired or sacked him in that stadium in St Petersburg where we lost to Argentina under bizarre circumstance. We would have been talking about 3 Nigerians that would have been in charge now

There are many reasons why Rohr can be sacked in his contract. You mean we would put up with an unproductive coach that cannot enhance our growth and development. I will sack Rohr without paying him any severance. Infact I will make him refund the money we have paid him because he has not earned it. Does Rohr reside in Nigeria according to the terms of his contract? Does Rohr respect his employers which the President has clearly stated that he’s not submissive to his authorities ie employers. How then can the Nff work with him. I don’t live in pretence or denial. Have asked yourself what our players feel about him.

Speaking honestly, the minister can direct Nff to sack Rohr without it gleaned as interference. The ministry of sports is the supervisor of the Nff. Fifa will definitely have no say if Rohr or any coach is sacked. An employer has the right to hire and fire. Is it fifa that pays the salary of Rohr.

: This is the first time I have heard in my life that an expatriate coach will be sent on capacity training by his employers whenever he performs poorly. Who can condone that in any circumstance.

ROHR ORDERED TO INJECT HOME BASED PLAYERS TO EAGLES 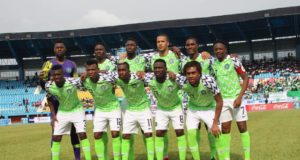 Admin - September 18, 2019
0
The Super Eagles of Nigeria will continue their build up ahead of the AFCON 2022 qualifying match against Benin Republic and Lesotho.