Nigeria women’s national team head coach Thomas Dennerby has denied reports linking him to take up the India U17 women national team job and that he still has interest in sorting things out with Nigeria.

Few weeks back, Thomas Dennerby pulled of coaching the Nigerian team, claiming that some influential members of the Nigeria Football Federation (NFF) were probing into his way of operation in the team, thereby influencing some of his decisions.

According to reports, The 60-year-old emerged as a top target for the india’s U17 job after possible chances of him leaving the super falcons. But Dennerby has come out to say that it is all fake.

“It’s fake news and click bait! There’s been no approach from any country,” Dennerby told Goal.com

“I believe they are quite aware of my situation with Nigeria but I want to clarify that I did not receive any proposal from India or any other country whatsoever, as they are saying.

“I am still under contract with Nigeria and currently focused on sorting out my future before thinking about what is next for me.”

The 60-year-old Swedish international , has been in-charge of the Super Falcons for over 18 months; makin himself a force to reckon with by helping Super falcons of Nigeria to their 11th African Women Nations Cup triumph last year in Ghana and also helping them to reach the round of 16 at the 2019 Women World Cup in France.

With Nigeria seeking to return to the Women’s Olympic Games in Tokyo next year, Thomas Dennerby still looking to work things out with Nigeria as his contract will end in the year 2020.

I WILL RETIRE AFTER MY NFF JOB– AMAJU PINNICK 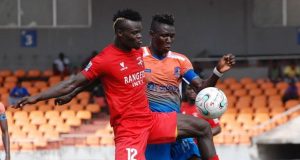 Admin - April 27, 2019
0
It was another come-from-behind win for reigning Aiteo cup champions, Rangers International Football Club of Enugu who on Saturday, April 27, 2019 booked a...