The Deputy Governor of Edo State, Philip Shaibu has described the new January 3rd to 17th date for the National Sports festival as ‘insensitive’.

Speaking to the newsmen recently at Benin, Shuiabu,who is also the chairman of the Local Organising Committee (LOC) for the 20th Sports festival argued that new date as suggested by the Presidential Task Force(PTF) on Covid-19  is not realistic giving the fact the  decision was made without proper consultations.

He further stated that the council even after meeting will also need to inform the host state to be part of the new arrangements that they are fixing giving the cultural approach.

Noting that the new date fall within the yuletide season, Shuiabu added that it could jeaopardise adequate preparation of athletes towards the multi-sports event.

“The council of sports will hold a meeting to discuss the date the PTF has suggested. I think the date could be adjusted to may be around March ending or begining of April and that will be subjected to the decision of Council state.” he concluded.

National Sports festival was initially scheduled to hold in March in Benin, Edo State but was postponed till December due to the outbreak of COVID-19 with the December date yet again unrealistic.

Meanwhile investigation revealed that athletes from across the states of the federation are now discouraged because of the incessant changing of date. 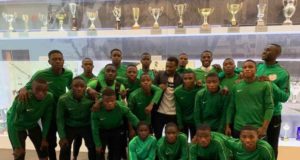 Bibian Onwugbolu - September 24, 2019
0
As Nigeria’s Golden Eaglets continue its preparations, the coach has said he will use the ongoing tournament to test run the team and...