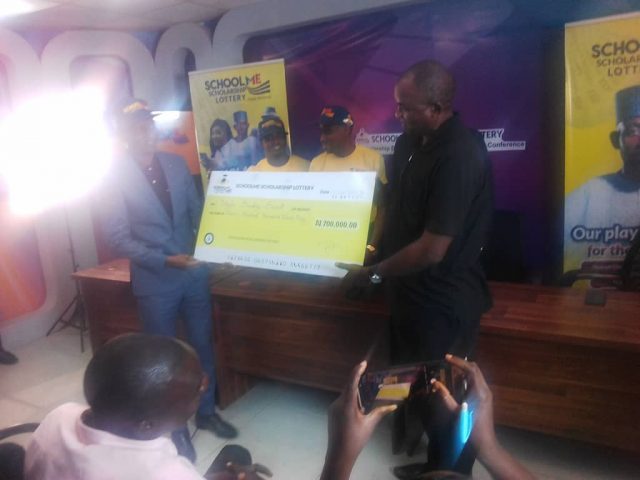 A Non-Governmental organisation,the schoolme Foundation in the federal capital terriotory on monday has unveiled scholarship for students and the presentation of cheques to the winners of the maiden scholarship draw held on friday.

The initiative which is borne out of the need to mitigate the financial constraints militating against educational enrolment & pursuit, saw winners emerged in varying degrees ranging from 100,000 to 700,000, all in a bid to support quality education for Nigerians.

Speaking at the event, General Manager of the Schoolme project, Mr Karim Olusegun said the project is aimed at supporting the educational ambitions of the Nigerian citizen who may not have the hope of a sound acedemic pursuit for lack of financial support.

“Schoolme project is a social intervention programme that will help solve the problems of lack of adequate, qualitative & responsive education in Nigeria”.

“We have so much deficit in the educational system in Nigeria where we have good brains & young people who aspire to go to school but cannot afford to pay for their fees”.

“Education should not be for the rich, the high & the mighty, but it should be for as many people who desire to have it”

Meanwhile, Head of operations Schoolme Scholarship lottery Mr Nsikan Ekaette called on parents & guidiance to key into the project & participate in the draws on behalf of their children & wards. He also emphasied on the need for organisations who supports their mission to equally leverage on the platform to creatively raise funds for their activities. stressing that they welcome strategic collaborations as well.

“Our products are a reflection of our efforts to carry everyone along. At Schoolme, everybody is a winner, when you participate in Schoolme lottery you are been philanthropic”

“If after participating you do not win the cash on offer,you would have ended up supporting someone else’s dream & Schoolme’s corporate social responsibility initiatives in education”

The project which is has no restriction & limitation to any citizen saw Ugwu Sunday Ernest a businessman from Kaduna state smiling home with the highest amount on the day after draws were conduted, as he walked home with total of #700,000 haven invested with as low as #700.

Sunday expressed delight for winning such an amount & thanked the initiators of the programme for the transparency in the whole process. Sunday also noted that before he was contacted to come & claim his prize money, his children had dropped out of school. promising that the money gotten will be used wisely in sending his kids back to school

Other winners inludes Rosemary Eze, Etuk Merry & mrs Felix who walked home with the sum of #100,000 each.

The school fund initiative is believed to create a pool of enlightened & educated citizens. And the next quarter will hold another fresh draws.

© Powered by RealSportsCast24 | Developed by GistitOff
Go to mobile version