Super Eagles winger Samuel Kalu is pleased to have gotten his first goal of the season for his team Bordeaux, in the match against Amiens hoping it will continue.

Kalu who played for 89 minutes and with 29 accurate passes  scored a goal at the 73rd minute in the match that ended 3-1 in favour of Bordeaux.

He told www.realsportscast24.co.uk after the game , “I am happy I scored my first goal for my team and I do hope to get more goals as the season progresses.

I strongly belief that we will get better in the League as we have had slow start this season. Hopefully, we will get back to our winning ways as expected”.

Speaking on his invitation against Brazil, Samuel kalu said it is a big honour to him. “we will give it our best as a team, it is an important friendly to test the strength of our team after the World Cup last year and AFCON that just ended .

We have quality players to match them strength for strength and at the end of the encounter, the better team will carry the day”, he added. 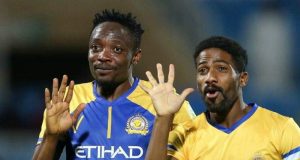 Admin - March 31, 2019
0
Ahmed Musa’s Al Nassr have toppled Al Hilal at the summit of the league in Saudi Arabia after they beat their closest rivals 3-2...