Ongoing Nigeria Professional Football League, technical adviser of Rangers International Gbenga Ogunbote has said that his team deserved the winning they got.

In a brief interview with www.realsportscast24.co.uk recently, Ogunbote praised the players effort towards the league games, saying they are really commendable.

Ogunbote who has also handled the Akure Gunners in the past praised Sunshine but saying it was their approach that earned them the away points.

“It was a good game for us, infact I commend the players effort and mentality towards the match played and we showed that we deserved the win by our approach to theGame as well,” he said.

Speaking on the Sunshine performance, Ogunbote stated, “Our opponent really gave us tough time, they proved alot to us, both maturity to game and otheriwise. I must say that there is much changes in Sunshine now than when I handled them in the past”.

“I see alot of maturity in them, I see alot of focused and zealousness in them. I know we beat them on their soil but I must say they have a good and quality players as us,” Ogunbote added.

Former Sharks handler also maintained that his boys would approach each game as it comes, adding that nothing will stop them from returning to the continental game next season.

“Like I also do, I first thank God for the one he did for us and ask him for more. We have a task on our shoulder and we intend to approach every game with maturity.

“Right now we are focusing on improving our scoring tactic and the work is still in progress and I am sure it will end in praise”,he stated.

The Flying Antelope are topping the log in group A with 27 points in 12 matches despite having 3 outstanding matches. . 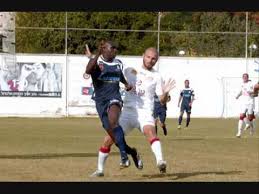