FC Sheriff Tiraspol Central Defender Faith Obilor said that playing in the UEFA Champions League with his team is a big experience for him.

Nigerian born Strong Hitler maintained that his experience in the European league is enough to earn him a slot in the national team.

“Football is not an easy job but when you call something business it became business for you. Football is my life and i think i am doing my best around it.

“My team has been playing in the UEFA Champions League since i joined two seasons ago and it’s good experience for me.” he said.

Speaking on his season so far he added, “It has been a good season for me with FC SHERIFF TIRASPOL this 2years. i had fun playing for them also thanking the management for given me the chance to prove my signing worth also believing in because i never played from the bench throughout my staying with them,” Faith said. 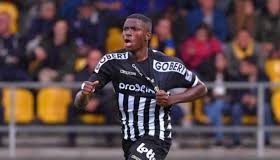 Will Charleroi pass off option to buy Osimhen for 3.5 million...

Sandra MEA, Liverpool - April 21, 2019
0
One of the biggest transfer posers in Belgium is whether Sporting Charleroi will pass off an option to buy Victor Osimhen for 3.5 million...