A first half  strike by former Giwa fc wing wizard, Amos Dadung Gyang was all Plateau United fc needed to overcome a hard fighting and resolute Mighty Jets Feeders team in the second semi final of the Plateau FA Cup.

With that 1-0 victory, Plateau United,who are the defending champions will confront their eternal rivals,Mighty Jets fc,in a repeat of last year’s final.

It would be recalled that Mighty Jets fc beat non league side, Jazzy Stars football Academy yesterday to qualify for the finals

Meanwhile, the Chairman of the Plateau State Football Association, Sunday Samson Longbap,through his first Vice, Ezra Godit, told journalists that the final between Plateau United and Mighty Jets will be played on Saturday with the Executive Governor of the State, Simon Bako Lalong in attendance. 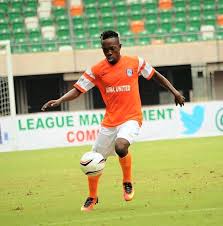