Pinnick made the remarks on Tuesday evening at the Samuel Ogbemudia stadium in Benin after a novelty match between his NFF board selected team vs Ex-Bendel Insurance FC led by the Governor of Edo state,Mr Godwin Obaseki.

The novelty match was to assess the facilities at the reconstructed stadium ahead of the 2020 National Sports Festival. The NFF president revealed that the  Samuel Ogbemudia stadium in Benin City, Edo State, will host the Super Eagles first match of the 2022 FIFA World Cup qualifier.He described the facility as superb and chose the Benin stadium as home of super Eagles.”

This stadium is not different from some of the best facilities we have seen in the world. You can see how beautiful it is,the standard of the light,the pitch and others. I went round and at the back I saw what is on ground; the swimming pool,tennis court,dressing room and all.

Everything in a perfect shape, and of course more will be done before CAF committee will come for the final inspection and certification. As a member of the CAF committee, I am already convinced by what is on ground here and I know it will be certified okay for International Tournaments.

This stadium is beyond the  standard expected. Kudos to Edo state Governor Mr Godwin Obaseki who made this possible. We are grateful to him for what he is doing in sports development especially football. ” Pinnick said.Speaking earlier on the choice of Benin hosting the NFF Annual General Meetings,which ended in Benin same evening,Pinnick said.

“It is the red white red Edo colour”. According to him, “You cannot talk about Nigerian football without talking about Edo. At a point in time, Benin was the main destination. Edo had about five Premier League clubs like Flash Flamingoes, Bendel United, Bendel Insurance,New Nigeria Bank and others and these clubs were in Benin and they paraded most of the Super Eagles players then. So,Edo is home of football. So, football is coming back home and that is why we are bringing the first World Cup qualifying match to Benin City.”

The 20,000 capacity Samuel Ogbemudia stadium had hosted some of Super Eagles and the  female national teams’ games in the past and it is prepared to stage world cup games from March 2020, according to the NFF president.Meanwhile, the Governor of Edo state Mr Godwin Obaseki and his Deputy Comrade Philip Shaibu scored a goal each to beat Amaju Pinnick’s NFF side 2-1 in the novelty match at the Samuel Ogbemudia stadium Tuesday evening. 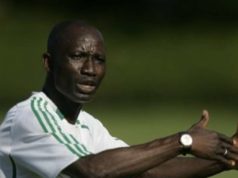 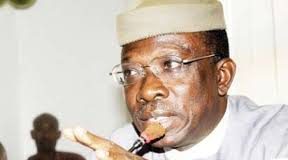 Why Super Eagles was disbanded after Mali 2002 – Ekeji

Admin - April 7, 2019
0
The former Director-General of the National Sports Commission, Chief Patrick Ekeji, has revealed the reasons behind the disbandment of the Super Eagles after the...