Samuel Ocheho has been re-elected as the President of the Handball Federation of Nigeria (HFN)
In a keenly contested election held at the Package B, Moshood Abiola National Stadium, Abuja and had 13 stakeholders voting, Ocheho defeated his opponent Mr. Saidu Jibril Ojih 7-6 to emerge as president of the nation’s handball governing body.
In the vice presidency election, Alhaji Bala Aminu Bodinga defeated Mr. Sylvester Otumba 8-5 to emerge the vice of the Handball Federation of Nigeria.
Thirteen stakeholders, which includes the just elected zonal representatives and other affiliate constituencies, who are eligible to vote took part in the election. 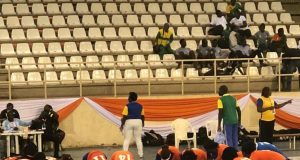