The head coach of the Nigeria Dream Team VII, Imama Amapakabo has heaped praises on the players of the team following their emphatic victory recorded against Libya on Monday in the second of the U23 AFCON qualifier.

Nigeria U23 team overturned their 2 goals deficit recorded in the first leg in Tunisia only to come to Nigeria and pummeled Libya 4-0 to progress to the next round with 4-2 on aggregate.

According to the coach, “All glory to God and praises to the players, I think the way they responded helped the team. Imama said

“I think they are one team that listen and they proved to me that if you listen it can happen.

“I told the players that it the easiest scoreline to cancel all they needed to do is to score one goal because you can never score two goals at the same time, and they did just that.

Imama also spoke on Emmanuel Amuneke’s achievement who qualified Tanzania for the 2019 African Nations Cup after 39 years of missing out.

“I am so proud of him, when the news broke yesterday (Sunday) I was so excited and I knew it was a point of contact for me, that he happened for Amuneke I know it is going to happen for me.”

The former Rangers international believed Nigeria U23 team will qualify for the U23 AFCON in Egypt even though they still have a two-legged match to play.

“It is the responsibility of the federation who knows our shortcomings to call us to camp in time ahead of the next round and also do the needful. We have moved from today’s game but we have to wait for whoever qualify between Kenya Sudan.”

“I have met with the players and I told them we have to keep working, though this victory is sweet,” he concluded.

Nigeria will play the winner between Kenya and Sudan in the last round of the qualifier for the U23 AFCON that will take place later in the year in Egypt. 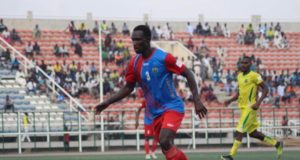 PLAYING ENYIMBA IN THE CONTINENTS WILL MAKE ME FAMOUS— EMMANUEL AMPIAH