Meanwhile, president of the Handball Federation of Nigeria (HFN) Mr Samuel Ocheho is confident that the team is ready to face Africa with the best preparation they got from the federation.

Ocheho, who was responding to journalists on the HFN media group on whatsaap, believes that the senior national male does not reflect the disbanded team that came last in the last nations cup in Gabon two years ago and will do well this time around as the target for the team is to qualify for the world cup.

“The team is ready to face the realities of the Nations Cup as our target is to qualify for the worlld cup”. Ocheho said

“At the last outing we came last but the team has promised to do extremely better this time around.

They have had the best of preparations since December 1, 2019 and are presently on training tour  in Tunis since January 1, 2020.

They have played grade A friendlies against Morrocco, a top Tunisian club side, Cameroun And RD Congo winning two and losing two”.

Ocheho is quite delighted with the progress and is of the opinion the momentum the team has an the moment and the necessary corrections the coaches have effected as seen in the friendly matches, the national team will make Nigeria proud in the nations cup.

The tour has afforded the team to make necessary corrections of their flaws and they have promised to do well and make Nigerians proud”.

While revealing that the Federation is happy with their progress, he also said that the team promised to take each match as it comes and create an upset against Angola in their first game.

“The Federation is happy to have given them the necessary tool to excel.

Now we look forward to great results from them. Everyone is in good shape and injury free.

Our first game will be against Angola and they have promised to create an upset. 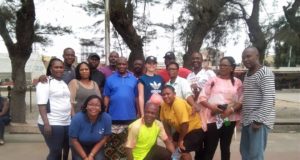 German Based Former Nigeria Handball Player Gives Back To Kids

Farouk Ahmed - February 1, 2020
0
It was a beehive of events at Rowe Park Sports Center, Yaba, Lagos as a lot of excited handball playing children gathered...
Go to mobile version