The president of the Nigeria Football Federation, Amaju Pinnick, after due consultations with the Chairperson of the Nigeria Women Football League, Aisha Falode, has agreed to have a  Virtual Meeting with the NWFL Premiership Club Owners.

The NFF president decided to meet with the 14 Club Owners in view of their April 10 dissents after initial agreement with the NWFL board, to play the Super Six and Bottom Eight, a decision that was taken after a vote was conducted on April 5 in a Virtual meeting. 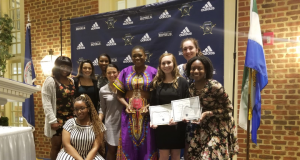 AKIDE-UDOH NAMED COACH OF THE YEAR

Admin - April 25, 2019
0
VIRGINIA BEACH, APRIL 24, 2019] Mercy Akide-Udoh has been named Regent University Athletic Department’s Coach of the Year. The Nigerian, who has only just completed...