Leadership of the Nigeria Basketball Federation is calling on the Honorable Minister of Sports, Chief Sunday Dare to call the NBBF Secretary to order before her damaging actions in the federation plunge the sport into political crisis and utter chaos.

This call has become necessary after the Secretary General, Afolabi-Oluwayemi Olabisi, has unilaterally entered into a partnership with a private league because of the NBBF’s delayed Board elections.

For observers, the numerous actions she has taken reeks of desperation and gross abuse of office, while openly expressing support for an interested party in the forthcoming NBBF Board elections.

“This is not fair to other consistent stakeholders and investors. The Honorable Minister must intervene so that she does not plunge the sport into a fresh round of crisis”.

“Many will want to know how a private league was selected by the Secretary General, amongst all the private initiatives, leagues and camps across the six geo-political zones and given preferential attention”.

NBBF leadership noted that since the SG has become the only person in charge of the Secretariat, as an exclusive preserve being staff of the Ministry of Sports, she has continued to apportion so much power to herself that she virtually commits so many blunders with no repercussions!

“She has taken it upon herself to massively abuse the office of the SG by unilaterally using the letterhead of the federation to officially invite teams and even technical officials to participate in a privately organized league that will take place in Abuja, and this is unprecedented.”

For keen observers, her decision reeks of double standard and clear favoritism going into the Board elections in the coming days, as directed by the Federation of International Basketball Associations (FIBA).

Her recent actions validates the saying that “absolute powers corrupts absolutely” because without the effective necessary checks from the board, she has continued to take unilateral decisions capable of harming the sport and the federation.

The Honorable Minister will save the sports, and indeed the Federation, from irreversible damage by calling on her to put a stop to her controversial decisions, communications and do a lot of proper consultations with the leadership of the NBBF for useful decisions to be taken. Decisions that will bring sustainable growth and unity in a fragile NBBF, which she has helped create and sustain. 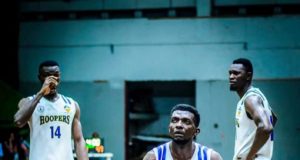 Farouk Ahmed - November 16, 2019
0
Rivers Hoopers and Raptors of Lagos will face off in the final of the 2019 NBBF organised President Cup National Final 8...
Go to mobile version