following three goals scored in two friendly matches, Rangers International forward Olawoyin Ibrahim has revealed that his best tidings are yet to come.

former Abia warriors scored two goals against heartland Fc in Owerri and also a goal against warri Wolves onn Sunday in warri before returning to Enugu on monday.

He told www.realsportscast24.co.uk in Enugu that his three goals so far in two friendly matches played were just the beginning.

According to him,” Hummm, I am happy with my stay in Rangers this season and i am happy i am able to score goals in two friendly matches played so far,” he said.

while asked if he will continue scoring, Ibrahim maintained that his best is yet to come, adding that he will do everything to justify his call to the team.

“My best is yet to come i must say because i know who i am and what i can do with ball anytime its in my possession.

“I believe in my self and also in my teammates, they are part of the reason i am doing well so far in the team.

“I am assuring my fans good outing and best performance with Rangers International both in the CAF Confederation Cup and Domestic League,” Olawoyin ibrahim assured.

Motsepe keen on develoment of football economy in Africa – Pinnick 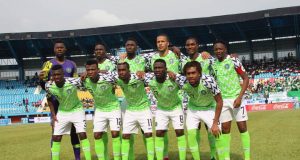 Eagles to host Zimbabwe ahead 2019 AFCON

Admin - April 4, 2019
0
The Super Eagles may host the Warriors of Zimbabwe in an international friendly game as part of the preparation for the 2019 African Cup...