The President of CAF, Dr Patrice Motsepe issued a statement today outlining the activities and governance and other changes that the new CAF leadership is introducing since their election in March 2021; to make African football globally competitive and self-sustaining.

It became apparent to the new leadership of CAF after conducting several meetings with current and potential sponsors, the private sector, some African Heads of State and Government ministers and stakeholders in football; that they have had a poor and negative perception of CAF concerning its adherence to governance, auditing, ethical, financial and management good practices.

These negative perceptions may, to some extent, be confirmed by the incriminating and damning Price Waterhouse Coopers (“PWC”) CAF Interim Report which identified certain irregular, unethical and improper transactions and conduct. This Report was circulated to the CAF Member Associations in May 2021.

CAF is committed to implementing the recommendations of the Final PWC CAF Report and ensuring that the irregular, unethical and improper transactions and behaviour do not happen again.

This should result in CAF being regarded and viewed as a respected Confederation that implements and adheres to governance, auditing, ethics, financial and management global best practices; making it attractive to current and potential new sponsors and partners.

It is also important that the quality of the competitions that CAF hosts are globally competitive and appealing to spectators, viewers and interested parties in Africa and globally.

In this regard steps are being taken to:

Since March 2021 several meetings were conducted in Africa and globally to advance and promote the interest of CAF and its Member Associations and also to build relationships and partnerships with current and potential sponsors, African Heads of State and their Governments, private and public corporations and other African and global stakeholders.

The African Heads of State with whom meetings were conducted and whose countries were visited by the CAF leadership are:

Developing and promoting football at schools and investing in the youth is imperative for the future of African football.

CAF and FIFA had a successful launch of the pilot project of the CAF Pan-African Schools Football Championship in Kinshasa which was attended by President Félix Tshisekedi and several of his Ministers and other football stakeholders.

We are also concerned about some of the contracts and agreements that CAF concluded in the past.

In certain agreements, as disclosed in the PWC CAF Interim Report, payments were made to middle men and third parties which are incomprehensible and unacceptable. These issues cannot be discussed in public as CAF has obligations of privacy and non-disclosure in these agreements.

EXCO may have to discuss and consider new CAF competitions which may generate additional funding or income for CAF, its Member Associations and bodies and also contribute to African football becoming globally competitive and self-sustaining.

In this regard, we are assessing and in preliminary discussions to start an inclusive and broadly supported and beneficial CAF African Super League. We have been following the attempts by some top European clubs to form a Euro Super League and will learn from their experience and pitfalls.

The issues relating to CAF and its media and broadcasting rights are also receiving serious attention as this is an important source of funding and finance for CAF, its Member Associations and bodies.

The President of CAF, Dr Patrice Motsepe, will continue visiting several Member Associations in their countries to advance and promote their interest and the interest of CAF and also to assist with building relationships and partnerships for the Member Associations with their Governments and potential sponsors.

There is a lot of work that needs to be done over the next few months and years to implement the objectives and goals of CAF, as stated, inter alia, in the amended “CAF 10 Point Action Plan”.

The unity and commitment of CAF’s Member Associations and stakeholders, as well as the interventions and changes that are being introduced by the new leadership is creating optimism and confidence that African football will, over the medium to long term, succeed and become globally competitive and self-supporting.

Dr Patrice Motsepe would like to thank the members of EXCO, the CAF Vice-Presidents, the Member Association Presidents and leadership, the 6 Zonal Presidents, FIFA and in particular President Gianni Infantino, the CAF Secretariat and Mr Veron Mosengo-Omba, the members of the CAF Standing Committees, African Heads of State and their Governments, our sponsors and partners and all stakeholders for their cooperation, support and commitment to CAF. 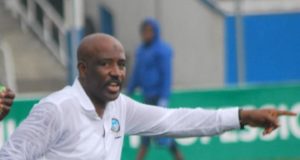 Bibian Onwugbolu - October 25, 2019
0
Usman Abd'Allah has praised the South African football system and suggests that TS Galaxy can now be seen in same light as...
Go to mobile version