former national Under 23 and and Warri Wolves forward told SportsDay in a brief chat after Tico/ Ekwueme preseason tournament played in Owerri over the weekend that, ” This is our first game here in Owerri and i must confess this is the best stadium ever and i think we will enjoying the league game once it starts.

Speaking on the preseason matches played during Ahlan Cup in Kano and Tico in Owerri, Makalala confirmed that,” With the level of the preseasons we have played i will say the team is blending so fast and also with the caliber coach on ground, Heartland will definitely pick a Caf ticket by the end of the season.

“All we need is to keep training, concentration and full attention from the management pending when the league will kick off. Right now we need more friendly matches to keep us busy and avoid distraction at the end of the day,” Makalala said. 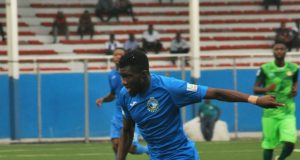 BALA BANKS ON UNBEATEN RUN FOR ENYIMBA’S VISIT TO LOBI

Admin - April 20, 2019
0
Enyimba forward, Reuben Bala has said that the team will look to protect their current unbeaten run when they face Lobi Stars in the...
Go to mobile version