Osho told www.realsportscast24.co.uk in Aba that Yobo deserve the job given to him by the football authority, saying his appointment will bring new live in the Senior National Team.

According to him, “ I do not know Yobo’s coaching qualifications but I am sure NFF did not do any mistake in given him the job.

“The young lad has served this country too well and he deserve every appointment given to him by the football authority,” he said.

“Don’t forget he is not the head coach but assistant so he has alot to learn and again he is too young by the time he will understand everything from Rohr, hopefully he will have enough to lay down for his players in future, so I do not see anything wrong with his appointment,” Fatai Osho said.

There was no election in Anambra State FA— NFF 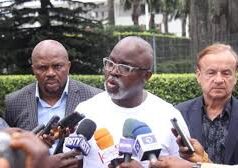 Bibian Onwugbolu - March 23, 2020
0
The Nigeria Football Federation on Monday called on all members of the country’s football family including stakeholders to pray hard in view...