Speaking with www.realsportscast24.co.uk after the victory on Wednesday night, Etebo expressed joy over the wonderful result that send South Africa out of the tournament.

According to him, “It was a well deserved victory so I am very happy we won and advance to the semi finals of the competition,” he said.

“The tournament is getting tougher by day and we get prepared by day also. We will keep on doing what we are doing without underrating any of our opponent.

The most important thing for us to play in the finals and as well take the trophy with us to Nigeria.

He however thank the hosting country Egypt for their support and cheers throughout the 90minutes against South Africa.

“The support was so massive and wonderful it was a boost to us. I say a big thank you to Egyptians for their total support to us last night,” Etebo added.

Morocco 2022: Pinnick charges Super Falcons to go all out for La Decima 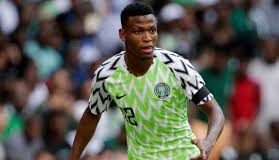