Heartland FC Supporters club have commended Imo State Governor Hope Uzodinma for bringing  sanity to the club, even as they demanded for a  new General Manager for the Owerri-based side.

In a letter signed by their chairman, Comrade Eze Nkemka, the supporters  pointed out that with the new soccer season set to begin in September, the government need to act fast to enable the club start pre-season in good time.

The supporters in the letter also endorsed the appointment of Hon Dan Chike Ogu as Sports commissioner, declaring that his coming would see Heartland move to the next level.

The letter addressed to  Governor Uzodinma through the sports commissioner stated inter alia: “Please, Your Excellency, we also want you to give us a new General Manager soon because the league will be starting by September so that the team can start early preparations. 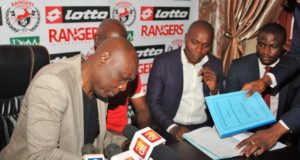