Obodo underlined that the Seagulls are perpetual strugglers in the top-flight and Simy should only consider joining the top six clubs such as Arsenal and Tottenham Hotspur should he decide to move to England.

With Crotone losing their top-flight status at the end of the 2020-2021 season, Simy has been linked with potential moves to Fiorentina, Udinese and Torino – three of the four Serie A clubs Obodo represented in Italy.

Nigeria’s all-time record appearance holder in the Serie A feels that Fiorentina would be the perfect destination for Simy, who put himself in the shop window by scoring 20 goals in 38 league matches last season.

Obodo argued that Simy should pick Fiorentina for sporting reasons and their passionate fans.

Obodo said: “If Simy wants to move to England, not to join Brighton.

He should go somewhere like Arsenal and Tottenham Hotspur, the big teams.

“For me the best place for him to go as a player because I was in those three clubs Fiorentina, Udinese and Torino, I would prefer Fiorentina.

“Fiorentina is a home of football, all football activities happen in that area and with the population, the way the fans back the players, he will play more better at Fiorentina because everything you need as a football player is there.

“It is just for him to prove his talent, display it to the fans, himself and his family as well, and to the world.

I prefer Fiorentina for him.

“Torino is not a bad place, Torino have one of the best supporters clubs in Italy but for me I prefer Fiorentina because of the kind of football they play, it’s better for him there, for him to remain at that level.

“A member of the Super Eagles squad to the 2018 World Cup, Simy had stops at Portuguese teams Portimonense and Gil Vicente before transferring to Crotone in 2016.

I WILL CAPTAIN THE SUPER EAGLES — ANTHONY IZUCHUKWU 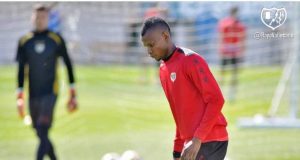 Sandra MEA, Liverpool - May 7, 2019
0
Rayo Vallecano  ace Uche Agbo has told SCORENIGERIA he will return to his parent club Standard Liege after the season is over in Spain. The...
Go to mobile version