A former Chairman of Secretaries of Football Associations in Nigeria and former Vice President of Osun United team, Mr Akin Adio has charged administrators in the Nigeria Football Federation to be virtuous and honest in their dealings if football game in the country would thrive.

According to him, round leather game would have thrived in the country but for corruption in the Glass House.

Adio gave this charge on Wednesday at the first Memorial Lecture of a former Secretary General of the NFF, Chief Taiwo Ogunjobi, organised by the Sports Writers Association of Nigeria (SWAN), Osun State chapter, in Osogbo.

Speaking as the guest lecturer on the topic: “Life and Times of Ogunjobi: Way Forward for Sports in Nigeria,” Adio, a sports analyst, argued that many football administrators would have been jailed if they had been probed.

He asked the football governing to pay athletes’ allowances on time and desist from diverting grants from FIFA to personal bank accounts.

He said Football Associations in states across the federation do not receive grant from NFF as and when due.

“Since Chief Taiwo Ogunjobi died, things have not been well with sports as it regards to football in Nigeria. In fact, soccer game is feeling the exit of Ogunjobi. Since his death, we have not been able to see any NFF official as honest and trustworthy as Ogunjobi. The corruption in NFF currently is disturbing and that is why football game is finding it hard to thrive in Nigeria.

” Where there is dishonesty, selfishness and corruption, things cannot move. The officials of NFF have not been faithful in the discharge of their duties. Many administrators in NFF should be in jail by now if not for their connections in high places. How can football thrive when officials are having personal bank accounts where money meant for development of the game is being hidden?

“I was the chairman of FA secretaries in Nigeria for 17 years and NFF only released N500,000 as grant to Osun FA some years back. And this is a football governing body that receives grant from FIFA every now and then. Now that the EFCC is probing them, they know want football association they didn’t fund to be furnishing them with account. This corrupt practices must stop,” he said.

Adio, who is also a former  General Manager, Osun Sports Council, called on NFF officials to be democratic in their dealings by appointing committees as recognised by the NFF Acts.

He tasked them to be honest with the finances of NFF and also promote grassroots football by establishing under 10, 13 and 15.

The football administrator described Ogunjobi’s death on February 11, 2019 as a big blow on football game and administration in the country saying that Nigerian teams qualified in all International Competitions during his tenure as Secretary General of NFF.

“Chief Ogunjobi had passion for football till he died. Even when he was passing through health challenges, the passion was still there. He was a Democratic leader and honest to Tue chore. He developed sports in the Glass House and sponsored so many competitions. The current NFF administrators should emulate him if football will develop in Nigeria.

I WILL RETIRE AFTER MY NFF JOB– AMAJU PINNICK 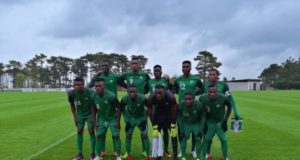