The Super Eagles’ striker Odion Ighalo who made his debut in the senior team in 2015, has told realsportscast24.co.uk in Alexandria, Egypt, that he was very happy to have scored the only goal which gave the Super Eagles the win in their first match of the AFCON tournament, adding that the most important part was the three points the team picked in the match, which gave them  the boost they needed for the second match.

The striker who played for Julius Berger Football Club before leaving for the Norwegian League than to the Spanish League before moving to China to join the Shanghai  Greenland Shenhua FC said the secret to being a predator in front of the goal is hard work. “It is just hard work. You know I’m a striker. You just keep learning every day. Keep working hard and doing your best. Sometimes the goals will come, you don’t have to keep your head down when the goals don’t come. The same way I work when the goals are coming in the same way I work when the goals are not coming. Sometimes you experience a dry spell, but that doesn’t mean you don’t know what you are doing. I don’t let negativity keep me down. I stay focused”.

Speaking on the criticisms that trailed him after the previous FIFA World Cup, he said, “I have been playing professional football for fourteen years so I am used to criticisms. This is my job. I don’t have any other one apart from football. I am used to it. When you criticize me, it gives me the zeal to work harder. I don’t let it weigh me down. I just keep going because I know what I can do. I just went back to my club and worked hard and when the opportunity presented itself, I took it”.The Super Eagles’ striker who scored seven goals in the AFCON qualifiers in what seemed like a reply to his critics said the ongoing AFCON might spring up surprises. “There are going to be surprised. There are no small teams anymore, especially in African football. There are no pushovers. You can’t walk into the field of play, stand and expect to win a game. The last two games clearly showed us that there are no small teams in Africa. We have to work hard.”

He concluded by saying that the Super Eagles would go all out in any game they play in the competition to ensure they go all the way to the finals. 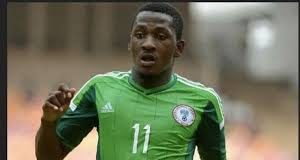 Early preparation will help U-23 in the AFCON. – Junior Ajayi