The Egyptian Premier League money bag will host the Aba Elephants in the 1st leg at the 30 June Air Defence Stadium al-Qāhirah, in Cairo while the Enyimba International Stadium in Aba hosts the reverse fixture a week after.

Anayo who has enjoyed a breakthrough season with the People’s Elephants, after his good form caught the attention of Super Eagles boss Gernot Rohr who later handed him an Eagles debut in the AFCON 2021 qualifiers against Lesotho and Benin Republic, will be out of the game against Pyramid FC to cards accumulation.

The Aba Elephant player earned his 3rd yellow card of the campaign after he helped his team secure a place in the last eight following as an extra-time win over visiting Orlando Pirates in Aba.

The development invariably meant he be out of the game against Pyramid FC.

Recall Anayo, 22-year-old has been subject to a transfer move away from Enyimba who have reportedly placed a price tag of €1m on new prodigy.

www.realsportscast24.co.uk authoritatively reports, Enyimba Technical Director, Jude Anyadufu said the price tag was inserted in his first contract, before his international debut and likely not to change, adding that the management will still look into it when the needs arise. 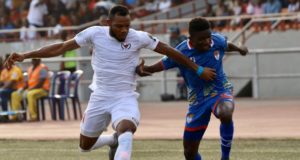 WE HAVE TO FOCUS ON THE DOMESTIC LEAGUE NOW—– SALISU YUSUF