The Captain of Rangers International FC of Enugu Ugwu Uwadigwu has appealed with their soccer fans to have patient and believe in the team despite losing against Pyramids FC of Egypt in their first CAF Confederation Cup played at Nnamdi Azikiwe Stadium on Sunday.

Rangers FC lost 3-1 at home against the Pharaoh’s family in front of over 15,000 fans at the stadium who were disappointed at the end of the game.

Speaking with www.realsportscast24.co.uk after the game, Uwadiegwu apologised to their fans over the team failure to win against Pyramids in the CAF competition.

He said,” First I have to thank the fans for coming out to support us in today’s game. It is true we did not meet up to their expectations but I strongly believe in the ability of each player registered for the season.

“I know we will make it to the semi finals of the CAF tournament, all I am asking is for them to give us another chance and believe in us as well not bulling us after a game.

“Such attitude from them will have a negative effect on few players. We did not play badly but we lose concentration after the red card issued to one of us but I know we have improved in our tactical training, all we need is a complete support from everyone to win our next match away,” Uwadiegwu said.

Away goal, Home Advantage for us Emeka Eze 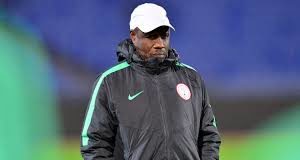 Farouk Ahmed - November 27, 2019
0
Newly appointed Rangers International FC Technical Adviser Salisu Yusuf has assured the Coal City that he would do his very best to...
Go to mobile version