The Confederation of African Football (CAF) has confirmed the appointment of Mohamed Ali Moussa from Niger as the centre referee for the TotalEnergies CAF Confederations cup additional playoff round tie between Rivers United and Egyptian club Al Masry on Sunday at the Enyimba International Stadium.

The FIFA badge referee is widely regarded as one of the most disciplined referees on the continent and was involved in handling FIFA World Cup qualification (Africa) matches, the most recent on 14th November 2021 involving Zimbabwe and Ethiopia.

For Sunday’s game, Moussa will be assisted by compatriots Abdoul Aziz Yacouba and Mahamadou Yahaya Gado as Assistant Referee one and two respectively, while Moussa Ahmadou Alou also from Niger will serve as the fourth official.

Rivers United and Al Masry will clash for the 1st time at club level on Sunday in TotalEnergies CAF Confederations Cup additional playoff round 1st leg encounter that promises lots of fireworks. Kick off is scheduled for 4pm.

Away goal, Home Advantage for us Emeka Eze 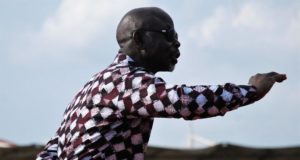 RANGERS READY TO AMBUSH AS PELICAN FOR PLAYOFF SPOT