AFC Bournemouth midfielder Nnamdi Ofoborh will rejoin the Flying Eagles training camp in Germany on Thursday after he was given permission to return to England.

Ofoborh, who shone in the Flying Eagles 3-1 win over German third-tier club VfR Aalen, will therefore miss the team’s next warm-up game against Red Bull Salzburg in Austria on Tuesday.

The Bournemouth U23 star looks set to have booked his place on the World Cup squad after he scored a goal and provided an assist in the win against VfR Aalen. 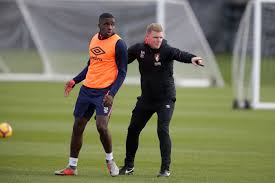 Officials also told www.realsportscast24.co.uk he has the approval of his Premier League club to be in Poland.