Former Niger International, Chikelue Iloenyosi has entered the race for the exalted Chairmanship position of the Anambra state Football Association.

Speaking with www.realsportscast24.co.uk recently, Iloenyosi explained very vividly what he intend to bring into the Anambra state Football Association declaring primarily that his first goal will be to unite the football family in the state.

“My coming to run for the Anambra FA is not because of anybody, I am coming to the Anambra FA to make a good change. it is not a political change, but a real football change. I want to use the medium to tell everybody that i am ready and i am going to do well.

“Part of the fourteen point agenda is to have a good sponsor, develop the game at the grassroots level, because all of us were grass root persons at one time or the other. Attract investors to Anambra state football, who will come and organise talent shows and discover talents in the state.

He stressed that part of his mandate is to ensure that the state have a premier league team when he emerges. “The governor of Anambra state is already doing something about having a male and women football teams at the elite level. He is also building a stadium, because that has been one of the problem of the state, we do not have a stadium but with a good stadium a lot of activities can go on.

Meanwhile, he insisted that the governor of the state does not have a candidate for the election as some persons have tried to potray. 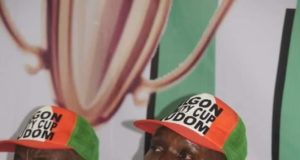 Bibian Onwugbolu - January 26, 2020
0
Algon jerseys lined up After one of break and delay, the much anticipated ALGON Unity Cup finals will...