Former Super Eagles winger, Emmanuel Amuneke has expressed joy over the contributions of sports Journalists domiciling in the foremost online WhatsApp platform, Sports World to development of sports in Nigeria.

The Ex Barcelona and Taca de Portugal forward who praised highly the sincerity, professionalism and quality of reportage displayed by the members of the platform noted that Nigerian journalists deserve the best and no thanks to COVID-19 effects on global football activities.

He said, “Sincerely speaking, you guys are doing wonderfully well. You made me feel at home here from Egypt on this platform and particularly during this COVID-19 pandemic. I think we Ex Internationals,sports administrators and coaches should do whatever we can to assist journalists in Nigeria over their contributions to the success of sports development in the country. Too little but kindly manage this for me Sunday Agunbiade and share it with your guys on this platform.

Amuneke who was previously a guest on Sportsworld WhatsApp group, stated that the cash donation is to encourage the gentlemen of the press to do more.

He explained that it has been wonderful working with the media, adding that both himself and the journalists have tolerated each other in the last 30 years.

Amuneke has indicated interest in coaching the Super Eagles of Nigeria if given the opportunity.

He played for Zamalek, Sporting CP , Barcelona , and Albacete .
Amunike played 27 times for Nigeria , scoring nine goals. He was part of the team that participated at the 1994 FIFA World Cup in the United States scoring against Bulgaria and Italy . He also helped the Super Eagles win the 1994 Africa Cup of Nations in
Tunisia , eventually being voted African Footballer of the Year in the year 1994.
Additionally, Amunike played all the games at the 1996 Summer Olympics in Atlanta , scoring the winning goal in the final as the national team won the gold medal.
Amuneke once coached the Nigeria national U17 football team to win the World Cup in 2015. On 6th of August 2018, he was appointed as the coach of the Tanzania national football team . qualified for the 2019 Africa Cup of Nations.
He won BBC African Footballer of the Year in 1996 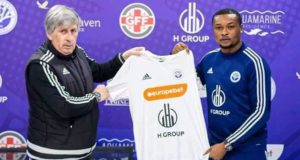