The newly formed All Nigeria Players Union has set a record a straight with Out of fear and frustration stating their mission which seems to be getting twisted. However, let it be known that they come in peace! Like Americans would say, “if it ain’t broke, then don’t fix it”. If that wasn’t the case.

The Association Spokes man Monday Kanu stressed the need of having another players union different PFAN which was lead by Tijani Babangida,

According to him,”There was a massive niche and void that has been in existence the last few decades. It is obvious to every concerning mind that something has to give in the face of the ever-growing frustration within the football family especially the retired players.

“From the All-Stars FC of Benin City to the Managers FC of Lagos, from the retirees of Raca Rovers FC of Kano to the veterans of Sharks FC of Port Harcourt, the story is the same, despondency and gloom. The only gathering of football veterans in Nigeria that is an exception to this rule is without a doubt,Lagos All-Stars.

“Thanks to the football philanthropy per excellence himself, His Excellency Raji Fashola. Do we continue to seat on the sidelines when we know for sure that this ugly situation can be mitigated with the right individuals in the right places? Posterity won’t be fair to us if we chose to do nothing.

The duo of PENGASSAN and NUPENG are all to the delight of Oil and Gas workers in Nigeria. The presence of Nigeria Labour Congress (NLC) didn’t stop the Trade Union Congress from joining theLabour Union. So goes for the Engineering professional bodies. We have the  Council of Registered Engineers of Nigeria (COREN) and Nigerian Society of Engineers (NSE).

“These all add value to their various Associations and Unions. The transportation sector is no exception. We have the ubiquitous
Nigerian Union of Road Transport Works (NURTW) and a host of others that include Road Transportation Employees Association of Nigeria (RTEAN), Nigerian Association of Road Transport Owners (NARTO), etc. Likewise, the ANPU is intended to provide those essential services that truly counts as welfare. ANPU is poised to restore dignity back to our teeming football veterans that are
presently disenfranchised on all fronts.

he further said,” It is a shame that programs as common place as Pension Policy, Health Insurance in the form of HMO, Group Life Insurance are still not in place after over Three decades of the Players Union. The much talked about Collective bargaining Agreement (CBA) is still a mirage. These are beneficial programs we intend to put in place in a matter of months. We have studied the part of failures of the existing body.

“We have seen their shortcomings and also experienced them but vicariously. We are determined not to fall for such parochial mindset. All Nigerian Players Union (ANPU) comes as a team of determined and qualified individuals that are ready to hit the ground running. We have a leadership that is ready to think outside the box. We are not going to be cap in hand begging our current players for membership dues in order to run the Secretariat. We’ll deploy every aspect of corporate governance that guarantees efficiency service delivery.

“We’ve been asked why the sudden interest from members of staff of NFF? Simple! They too as critical stakeholders, having plied the trade are also sick and tired of the non-performance of the existing body. They too have been yearning for a bit of fresh that would usher in some succor for us. These are the reasons why All Nigerian Players Union (ANPU) came into being. We came in to fill that void. No
need to be afraid us or embark on further frivolous litigations as has been the pattern. We come in peace,” Monday Kanu added. 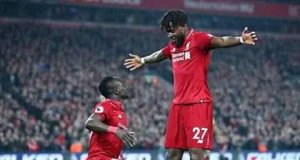 LIVERPOOL MADE HISTORY AGAINST BARCA

Sandra MEA, Liverpool - May 8, 2019 0
Liverpool produced one of the greatest Champions League comebacks in history by overturning a three-goal first-leg deficit to beat Barcelona 4-3 on aggregate and...
Go to mobile version