The Referee that handled a match between Tunisia and Mali in the ongoing Africa Cup of Nations Essam Abdel Fatah has been hospitalized following his inability to finish his officiating.

The referee initially blew the final after 85th minutes before the match resumed again.

www.realsportscast4.co.uk gathered that CAF referee, Essam Abdel-Fatah the Tunisia vs Mali suffered from heatstroke and severe dehydration, which made him lose his concentration. He was taken to hospital for a check up and further treatment.

However the end of the match was marred by the controversial decision of the match referee to put the game off seconds before the end of regulation time. The Malians returned to the pitch to play the remaining time, but the Tunisians preferred not to return to immediately look into the next match.

Mali’s victory sends them to the top of the group before their second match against The Gambia on 16 January. The Scorpions will play Mauritania in the second match of Group F. 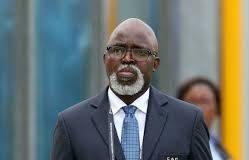 Bibian Onwugbolu - June 30, 2019
0
The Nigeria Football Federation president, Amaju Pinnick along with the Governor of Abia State, Ipeazu, has asked the Super Eagles to take...
Go to mobile version