It may have been a dream for the pre-match depleted Tunisia, it turned a nightmare for the Super Eagles as they were dumped out of the Africa Cup of Nations by unlikely heroes, the Covid-19 ravaged Tunisia.

A team that lost two group games suddenly found themselves in the quarter finals at the expense of the team that won all matches. What a twist of fate!

Tunisia are now to meet Burkina Faso in the quarter-finals. The game changer was the blistering shot taken by Youssef Msakn just two minutes into the second half.

Knowing fully their short comings of losing seven players to Covid and having their coach also in isolation, they contained the Super Eagles and profited on counter attacks.

Nigeria’s task was made harder when Alex Iwobi was sent off following a video assistant referee review.

Morocco 2022: Pinnick charges Super Falcons to go all out for La Decima 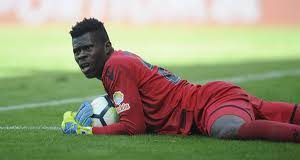 Bibian Onwugbolu - July 17, 2019
0
Super Eagles third choice goalkeeper Francis Uzoho is likely to man the post in a third place match against Tunisia in the...
Go to mobile version