following his wonderful performance against the Pharo’s Egypt in the ongoing African Cup of Nation Super Eagles defender Kenneth Omeruo has proved how ready he is to set an record as he target the trophy for the second time.

CD Leganes defender was among the team that won AFCON for Nigeria in South Africa 10 years ago.

Speaking with www.realsportscast24.co.uk in Garoua yesterday, Omeruo said, ” I fee very happy for our victory against Egypt in an opening game, it has always been hard for us starting in every game but this time around it a different game for us.

“It was a beautiful one for me and the entire team though we came on them well prepared and we will continue the same way in our remaining matches.

Speaking on his performance, he said “I have always been on top of my gam both in my clubs oo but it all depends on the manager who believes in you. it is an opportunity i have to take and its not about me but team i alwyas supported whether i play or not.

“This is AFCON and you know how Nigerians take the competition to heart so i have to give my best to make sure the get the joy they deserve from us. Kenneth Omeruo said. 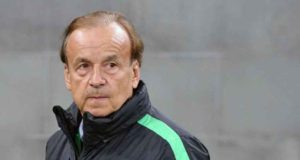 ROHR YET TO DECIDED ON HIS FUTURE WITH THE SUPER EAGLES

Bibian Onwugbolu - July 20, 2019
0
Super Eagles head coach Gernot Rohr said he is not sure if he will continue managing the affairs of the Nigeria national...
Go to mobile version