Nigeria head into their final fixture in Group B having already guaranteed their place in the knockout stages of the 2019 Africa Cup of Nations.

Madagascar – on the back of their first-ever win in the competition – know that a draw against the Super Eagles will be enough to seal their place in the next round.

Madagascar had already achieved their main goal by simply qualifying for the Africa Cup of Nations for the first time in their history, but Barea have continued to impress since arriving in Egypt.

They would have been delighted with a 2-2 draw against Guinea in their opening group fixture, with their opponents only salvaging a draw thanks to a second-half penalty.

However, that may have only been the start of Madagascar’s journey with the minnows registering a famous 1-0 success over Burundi on Thursday evening.

The goal – which came from a Marco Ilaimaharitra free kick – has put Madagascar in a strong position when it comes to progressing through as one of the best third-placed teams, but there is still hope of claiming second spot.

A draw against Nigeria will be enough to go through as runners-up, with a win being required for Madagascar to finish ahead of one of the tournament favourites.

Either way, this group of players have arguably already achieved more than they would have initially expected, although that will not lead to them taking their foot off the gas on Sunday.

The country is on a high after the celebrations of their Independence Day earlier this week, and Nicolas Dupais’s team have a chance to prolong the positive atmosphere back home.

Nigeria have struggled for goals over the past eight months, and their lack of a clinical touch has the potential to undermine their overall performances in this tournament.

However, two 1-0 wins have put the Super Eagles in a strong position to win this group, with anything less than that deemed to be a setback when considering where they would prefer to be placed in the knockout stages.

Odion Ighalo’s 77th-minute strike against Burundi got Nigeria off to the perfect start, before Kenneth Omeruo found a late goal to get his nation past Guinea earlier this week.

Boss Gernot Rohr will acknowledge that his team must improve if they wish to win this competition for the fourth time in their history, but two clean sheets in a row will no doubt fill the German with optimism going forward.

Madagascar will provide a different type of opponent on Sunday, one which may look to frustrate Nigeria when they are misfiring at the other end of the pitch.

However, there remains a gulf in class between the teams, and this is an opportunity for Nigeria to rediscover some form in the final third.

Given their creative options, it remains a mystery why an effective combination has not been found thus far, but Rohr will feel comfortable knowing that he can turn to other players should they continue a run which has seen them net just twice in almost five matches.

Rohr will likely make alterations to his team at the weekend with Nigeria having already booked their spot in the second round.

Ighalo could be among those who are rested with Paul Onuachu a potential replacement, while John Obi Mikel is a possible starter ahead of Wilfred Ndidi.

Alex Iwobi may retain his place in the side, although Brighton & Hove Albion’s Leon Balogun could be another to miss out, along with Abdullahi Shehu and Jamilu Collins who have injuries.

Dupais could revert to a more defensive formation for this game, rather than going with the 4-3-3 which was used against Burundi.

Sunday’s fixture will represent the fifth meeting between the two nations, and Madagascar are yet to register a win or a goal against their next opponents.

Nigeria were held to a goalless draw back in 2000, but they have since netted five goals without reply in the last three contests.

However, it has been almost eight years since the teams met during qualifying for the 2012 Africa Cup of Nations.

Madagascar head into the biggest game in their history full of confidence, but we are backing Nigeria to do a professional job in Alexandria. The Super Eagles have struggled for goals so far, but that may change on Sunday. 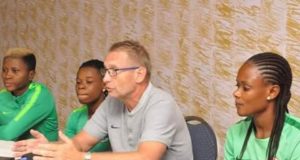 Admin - September 23, 2019 0
Embattled Super Falcons’ coach, Thomas Dennerby may have kissed his job goodbye contrary to his claim that he was still under contract with his...
Go to mobile version