After conquering the National Division One League in Kaduna last year, Adorable Angels triumphed in the Prudent Energy Handball Premier League 2020 and were crowned champions on the final day of the league season which was decided at the Indoor Sports Hall of the Moshood Abiola National Stadium, Abuja.

Adorable Angels needed to win to emerge Champion and they certainly dugged deep as they defeated former champions Plateau Peacocks 29-28.

The Ilorin based club finished with 26pts, one ahead of Edo Dynamos in second and two above defending champion Safety Babes in third.

Safety Shooters, who were confirmed champions of the men’s category on MatchDay 13 and had won all their previous matches, lost to inform Rima Strikers 27-24 in a dead rubber match.

They were crowned champions as they had 30 points and defending champion Kano Pillars, after defeating Confluence Stars 36-21, had to settle for second with 29 points while Seasiders Boys of Lagos, who defeated Plateau Vipers 36-28, finished third with same point as Kano Pillars but lesser goals compared with the ‘Sai Masugida’.

Delta Force confirmed their relegation from the league after they lost to De Defenders 28-24. They and Borno Spiders who lost to Niger United 34-26, have been relegated to the National Division One League.

The league’s most valuable player for men’s and women’s categories are Abdurazak Idowu of Adorable Angels and Atabo Abubakar of Safety Shooters while Idowu also got the highest goal scorer award in the women’s category alongside Anas Muhammed of Rima Strikers. 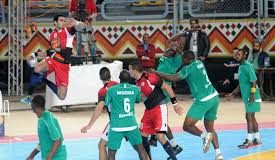 Farouk Ahmed - April 6, 2020
0
To cushion the effect of the covid-19 virus, the athlete representative of the Handball Federation of Nigeria (HFN) Mr. Udale Joseph Haruna...