Abia Warriors Football Club of Umuahia has given one of her Youth team goalkeeper Chibueze Lambert  his first professional contract, the club Sporting Director, Patrick Ngwaogu, confirmed.
Abia Warriors posted the update on the club website, revealing that the 18-year-old had put pen on paper for his first professional deal for the Umuahia warlords.
The news came as an excitement to followers of the Club’s Youth team, who have always tip the youngster for greatness.
The youngster had commanded regular shirt  for the Abia Warriors Team B in majority of the matches they played.

Speaking to the Abia Warriors website, Lambert admitted that things are going well for him this year, and he is in the league to learn, and  making good use of every single opportunity given to him in the league.

“It was a good and exciting experience with the club’s Team B and I promise to justify my promotion and Signing of my first professional contract with Abia Warriors. I am prepared to give a healthy competition to other well experienced goalkeepers in the team, and also learn from them.

“ My personal goal is to carve a niche for myself in the Nigeria Professional Football League and am most grateful to the club management for believing in my ability. I am more excited with the quality of goalkeepers in the team, and the coaches. These are people that can make the development of a young player faster”.

Reacting to the promotion of the young goalkeeper, the club’s Sporting Director,  Patrick Ngwaogu, said.

Lambert has shown lots of top level qualities during his time with the Youth Team  and that’s the reason he ranks among the five youth players registered for the new season by the hierarchy of the club.
“Austin Njoku, a right full back was also given a professional contract after he impressed with Abia Warriors Youth Team”

“In all, we signed a total of nine (9) new players, exactly the same number of players we didn’t renew their contracts”, the Sporting Director concluded.
On Tue, Sep 1, 2020, 11:27 AM Yinka Owolewa <yinkaowolewa@gmail.com> wrote:
ABS forward joins Danish club

ABS Ilorin FC forward, Olakunle Olusegun, has joined Boldklubben Fremad Amager, a Danish professional football club based in the district of Amager Vest, Copenhagen, in an undisclosed fee in a long term contract.

ABS Director of Football, Alloy Chukwuemeka, confirmed this in a statement on Tuesday in Ilorin that the club has concluded his transfer to the Danish club.

“We are delighted to see that Olusegun is progressing very well and we are very happy to be part of this.

“At ABS FC, our objectives are always the same, to discover, train and nurture to stardom.

“We still have plenty of Olusegun in ABS but everyone will shine at their own time” Chukwuemeka said.

Chukwuemeka confirmed that the player had been sent to FDC Vista of Russia since 2019 before his move to Fremad Amager.

Olusegun, after his unveiling on Tuesday has expressed his delight at the move.

“It’s the first big opportunity for me, and a chance I’m been looking forward to. My goal for my U-17 matches was to perform as well as possible, and get better for each match.

“I was included in trial training several times in February in Turkey at the training camp with Fremad Amager, and was able to show myself there.

“I already know several of the players, and in addition I have almost just met them all in Turkey. I have talked a lot with Sodiq and Sammy, and they have prepared me for life in Denmark.

“Both the country and the club seem like a perfect solution to me and therefore it was an easy choice. I’m looking forward to making my debut, and it would be great if it happens tonight, ”says Kunle.

Fremad Amager has since confirmed that the National U-17 player will wear Jersey number 6 and he is in the squad to face B 1908 in the first round of the Danish Cup on Tuesday (Today). 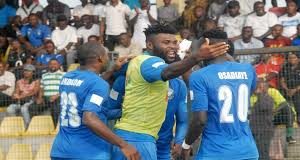